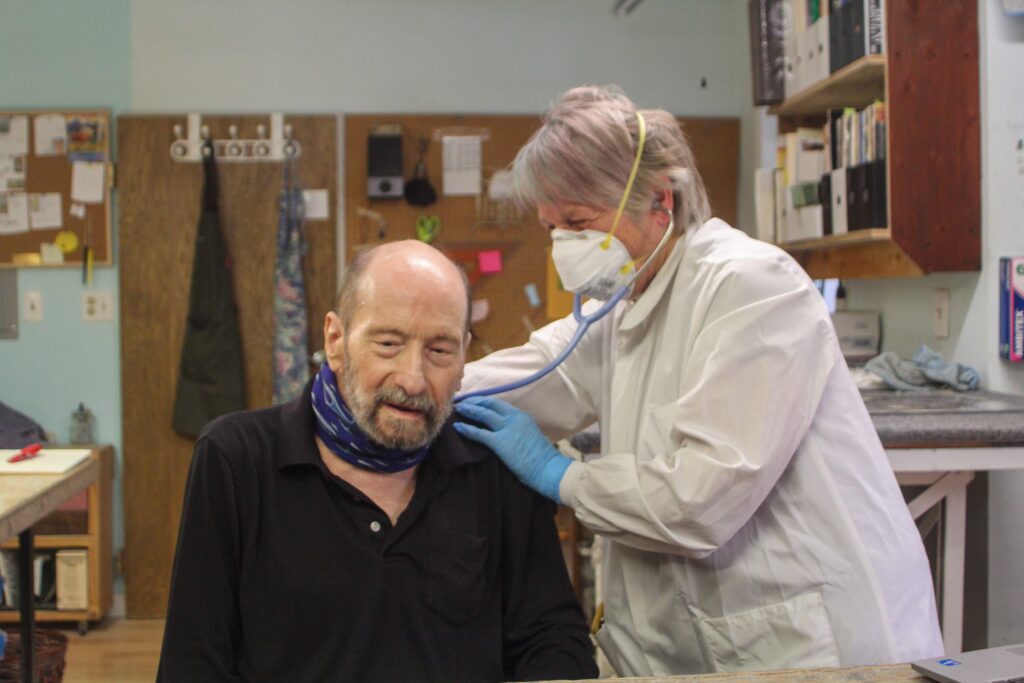 Joe LaSorella getting a check-up from his primary care provider Barb Sutton.

Joe LaSorella knows better than to take his independence for granted. He’s made choices that determine his autonomy. And he sees Housecall Providers as a partner in keeping his independence.

When you walk into LaSorella Studios, you see a busy craft studio, anchored by a large, L-shaped workbench with beautiful stained-glass windows in varying states of assembly. Employees meticulously match glass colors, heat metal, and other tasks to make and repair stained-glass pieces. From his rolling office chair, owner Joe, a Housecall Providers primary care patient, oversees the workers, reviews the day’s orders or talks on the phone with a client.

Joe keeps the wheels rolling on his stained-glass studio because he enjoys the work. The level of independence he enjoys is a testament to his work ethic and to his determination. Joe has spinal stenosis, which limits his mobility, a genetic disorder that affects his ability to use his hands. But his legs can still push his big-wheeled chair around the office and shop, where he can oversee workers and manage operations. Well into his seventies, he is slowing down a little and he can no longer use the tools his hands know so well, but he still puts in a full day’s work.

Joe is keenly aware that his independence has much to do with his choices over the years. “In a wheelchair that someone else is pushing you don’t have the control or the peace of mind necessarily. So, I feel comfortable in the house. We’ve always got people around and I can do most things myself.”

Housecall Providers works with him to keep him comfortable and in control. “It is a godsend to have the doctor come to my home. Bundling me up to go to the doctor, I need to push myself backwards down the ramp and have one of the big guys here pick me up under my arms and put me in the car. Then, do it all over again to get back home.” Without skipping a beat, he deadpans, “it’s a little bit of an ordeal.” Sparing Joe this ordeal helps him continue to thrive despite his obstacles. “They can also do tests and blood work; I couldn’t ask for more – it’s a big relief.”

In his bustling studio where artisans repair or build magnificent works of art, Joe conducts the process like a circus ringmaster and makes it clear he is just as often the one providing the help. Joe likes it that way.

His care team at Housecall Providers likes it that way too.