Connection key to living with COPD 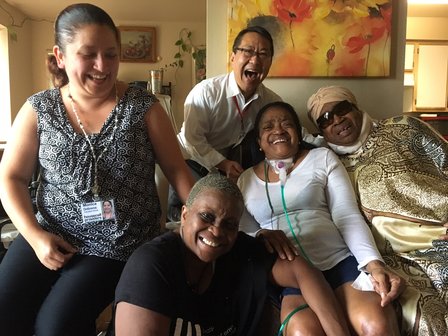 Gloria McClain (center) surrounded by her family and care team members from Housecall Providers and CareOregon.

According to Gloria McClain, the period before receiving support services from CareOregon was one of the loneliest and darkest times of her life.

“For a long time, I didn’t think anyone was listening, and that is what scared me the most,” says McClain, “No one knew my story, and I wanted others to know that you can get past hardships, no matter how many times you fall, you can get back up.”

McClain, 68, who suffers from Chronic Obstructive Pulmonary Disease (COPD), is Housecall Providers’ first palliative care patient not associated with its primary care program. Housecall Providers, which became a CareOregon company last spring, hopes to offer this care to more CareOregon members who, like McClain, could benefit greatly from an extra layer of support.

The right resource at the right time

“Improving the quality of life for CareOregon members with advanced illness is without question one of the benefits of this new partnership,” says Housecall Providers Clinical Operations Director Kristi Youngs, BSN, RN, CHPN. “With CareOregon’s Advanced Illness Care program now finding a ‘home’ at HCP, it will help us increase our capacity to provide the right resource at the right time for our members.”

No one knows better than McClain the importance of the right resource at the right time. For the last five years, she has relied heavily on the support of one of CareOregon’s respiratory therapists, Heather Stoecklin.

“Heather was going to do everything that she could do to help me because she saw my will to survive,” says McClain. “As I held on to her, she said, ‘Don’t worry Gloria. It’s going to be rough, but I won’t leave you.’ and we have been together ever since. She is definitely one of my angels.”

Another “angel” of her care team is CareOregon nurse Monica Ontiveros, BSN, RN, CCCTM. Ontiveros has been visiting McClain at her apartment in North Portland since last December. “She’s never let me down. She doesn’t talk a lot – it’s her presence that makes a difference,” says McClain.

Now energy is used to engage with community

Receiving medical care in the comfort and convenience of her home has meant that the energy she would normally spend getting to her appointments can now be used to engage with her community.

“I am able to go to my meetings, which is so wonderful because it gets me up and out and allows me to communicate with people of all walks”, says McClain. “Knowing that there are other people in the same position as you, is important. Not so they would feel sorry for me – but to let them know that they are not alone.”

Listening the foundation of palliative care

Palliative medicine focuses on providing relief from the symptoms and stress of a serious illness. By deeply exploring a patient’s personal goals, the palliative care team helps match those goals and options. Listening becomes as important as taking a patient’s vital signs because it may allow a care team member to discover what is at the core of a patient’s distress or depression.

“A lot of things were going on with me around anxiety and depression, and I wanted to discover where those emotions were coming from,” says McClain. “I could feel myself giving up at times when I would start to backslide, and when that would happen, I didn’t feel right with God.”

During one of their usual Tuesday appointments, Ontiveros was joined by Housecall Providers Palliative Care Spiritual Counselor Dean Yamamoto, M.Div., BCC, as part of the two organizations’ integration work.

“I had known that Gloria was struggling spiritually, and I was working on trying to connect her with a church,” says Ontiveros. “On a day when Dean was with me, he and Gloria had a moment to connect privately, and that is when she shared with him her desire to be baptized.” 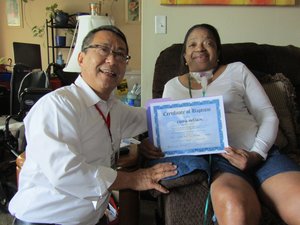 An ordained Methodist minister, Yamamoto was honored to be asked to perform her baptism, especially after hearing how much anxiety she was feeling from not taking that step in her spiritual life.

“The job of a palliative care chaplain is to stay within the patient’s spiritual frame of reference and to support whatever that might be,” says Yamamoto. “In Gloria’s case, it was the service of Baptism, and it was such a joy to be with her family and beloved care team as she fulfilled such a long-desired goal.”

There was a time that McClain thought she had used up all her chances, but the support of her family, community and her care team showed her how important it is that she carry on.

“I feel blessed every morning I take my first breath,” says McClain. “I no longer ask, ‘why me, why me?’ I know now that it is so somebody else can know why.”

The best of both worlds

“This is such a great example of why Housecall Providers and CareOregon joined forces. To be able to provide the best of both worlds to our members/patients really makes me excited for what we will achieve together.”

For now, it was offering support to a woman who felt isolated and scared by the confines of her illness.

“They let me know that I am important and that I am not alone on this journey,” says McClain.