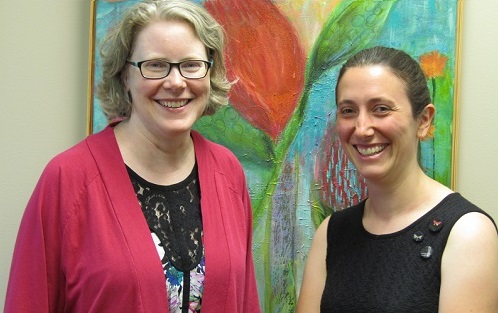 Doctors Pam Miner (l) and Naja Di Pilla have been working together since last spring.

Having a vibrant volunteer program means that we are privileged to have an assortment of community members with various backgrounds interested in supporting Housecall Providers through one-on-one engagement with patients as well as through administrative projects.

In the five years that Housecall Providers volunteer coordinator Todd Lawrence has been at the helm, hundreds of people have been through his volunteer trainings. Some of those volunteers have even found their way to permanent positions within the organization.

“I think after a few months volunteers get a really good sense of the type of organization that we are and begin considering what job opportunities are available,” Lawrence said.

At the time, Lawrence was very excited to introduce Dr. Di Pilla to Medical Director Dr. Pam Miner, as it is a rare find to have a doctor’s skill set available to support the staff.

“I love patient care but this was not what I was looking for in my life and career at the time so I was particularly interested to see that there were administrative opportunities available at Housecall Providers as well,” Dr. Di Pilla said. “When I contacted Todd, he was enthusiastic and really helpful and I had a feeling it was going to be a good fit.”

Dr. Di Pilla received her medical degree from the University of Melbourne and completed an intern year (the equivalent to a residency program) before she and her husband moved to Palo Alto, California so he could complete a five-year, post-doctoral position at Stanford University. Once completed, her path led her back to Australia and she worked in hospitals and rotated between sub-acute and geriatric care, the latter being of particular interest to her.

“I moved into general practice with the plan of continuing there for the rest of my career and really loved it – however, plans changed,” Dr. Di Pilla continued.

And change they did. Her husband, now a research scientist, had been offered a job at Oregon Health Science University (OHSU) and the opportunity was too good to pass up so the family embarked on another adventure, this time to the Pacific Northwest.

Focus has turned to healthcare administration

Dr. Di Pilla, who is getting a healthcare MBA at OHSU, first heard about Housecall Providers when a class discussion turned to innovations in health care. Since returning to the U.S., Dr. Di Pilla had changed her career focus to the business/administration/policy side of health care since our country does not recognize her medical qualifications. In order to practice medicine here, she would need to take the board exam and go through a four-year residency program. With her new roots firmly in Portland and her daughter in primary school, it was not a feasible plan.

In her time as a volunteer, Dr. Di Pilla had been assisting Dr. Miner with note taking, filing, research and synthesizing information anywhere from two to five hours a week.

“I really appreciated Naja’s willingness to pitch in with research and administrative tasks,” Dr. Miner said. She provided a great analysis from someone who understands both the clinical and business side of healthcare. “We are thrilled to now have her managing some of our benchmarks and regulations as well as collecting and monitoring many of the quality measures mandated by [the national demonstration project] Independence at Home.”

For the time being, it is clear we have a rising star in our midst and one that is very happy to be part of an organization that is helping to change the way health care is delivered to the chronically ill. “I am really loving working with everyone at Housecall Providers and am so grateful for the opportunity,” Dr. Di Pilla said.