Don Dickey: Hospice team guides him to the end of life 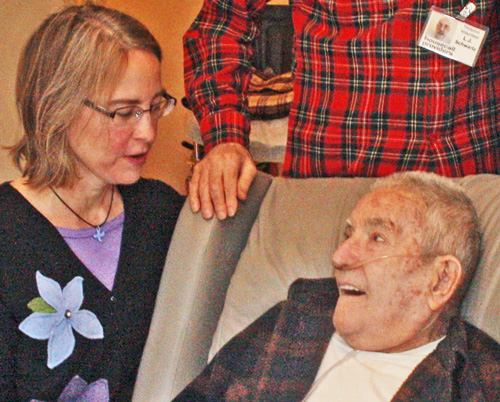 Don Dickey led an active life, excelling in sports as a youth, pursuing several different careers as an adult and making friends wherever he went. Beset with lung problems from his twenties, he became a Housecall Providers primary care patient in 2007.

Don moved into an adult foster care home in Lake Oswego operated by Felicia Barza, an immigrant from Romania. There, he lived comfortably, enjoying the company of others in the home and becoming close to Felicia.

As his health deteriorated, our hospice team became involved in his care. This did not mean that Don had to move to another residence. For Housecall Providers primary care patients, the transition to Housecall Providers Hospice is a seamless one. The main difference in Don’s life was that the now received visits from our hospice team, including his primary care provider, Teri Hiller; Nancy Gregory, hospice RN; hospice volunteer Larry Schwartz; and our hospice chaplain, Jill Johnson.

Blessed with a wonderful sense of humor and a sunny disposition, Don constantly delighted members of the hospice team involved in of his care. “Don was just a warm kind of person,” said Larry Schwartz. “A real character, very, very funny!”

Just before Thanksgiving 2011, with family and friends gathered at his adult foster care home, he celebrated his 92nd birthday. He enjoyed a piece of cake and was looking forward to Thanksgiving at the foster home operated by his beloved friend and caregiver, Felicia Barza. A few days before Thanksgiving, Larry, Jill, hospice program director Rebecca Ashling and hospice medical director Lara Garrett paid Don a surprise visit. He laughed and joked and told stories, raising the spirits of everyone in the room. Late that night, Don passed away peacefully in his sleep, with Felicia at his bedside. All agreed his last day was a splendid one indeed.