Far from home, our providers bring health and hope to those who need it most 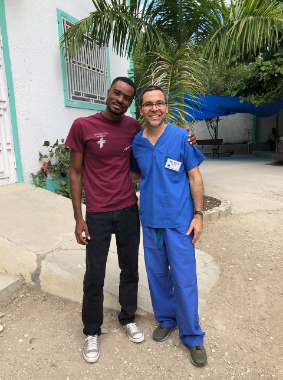 Physician assistant Ivan Wang stands with his interpreter in Haiti. Ivan was part of a team that treated over 700 patients in just five days.

For many of our primary care providers, offering home-based medical care is a calling to help our most vulnerable community members experience the best health possible. It would appear for two of our providers, the word “community” extends far beyond the boundaries of the Portland metro area.

Over the last few years, Housecall Providers Physician Assistant Ivan Wang and Nurse Practitioner Barb Sutton have traveled to Haiti and Jamaica, respectively, to provide medical care to citizens of two of the poorest countries in the Western Hemisphere.

Ivan traveled in the fall of 2018 with the Vancouver, WA group Haiti Foundation for Hope, spending eight days in rural northern Haiti. They were there to support a clinic that the foundation had help to create expand its reach with a medical campaign. Joining him was a pediatrician, an OB-GYN, nurses, paramedics and a pharmacist. The team provided care to over 700 patients in just five days. Ivan alone treated nearly 100 patients – mainly those with GI issues, a result of infected water.

It was his hope to return last fall, but the country has been on lock down amid violent protest. According to the World Bank, more than half of the population of Haiti lives below the poverty line, surviving on less than 2.4 U.S. dollars a day.

“The health disparities and the hardships that Haitians go through are immense,” says Ivan. “The people who are pretty low income here in the U.S. have so much more than their counterparts in Haiti.” Even with a high poverty rate, Ivan says that things don’t cost that much less than in the U.S.

Alarmingly, only four percent of Haitians live past the age of 65, which is not surprising considering the extreme poverty and the high unemployment rate (some estimates as high as 70 percent) that exist in the country.

“So many couldn’t afford lab tests, so we made presumptive clinical diagnoses with empiric treatment plans because of a lack of resources,” says Ivan. “Even though they cost very little by our standards, $1 to $5 dollars.”

Like Ivan, Barb also saw extreme poverty and lack of health care resources when she volunteered to go to Negril, Jamaica with a clinical team run by her friend, Nurse Practitioner Susan Bartsch of The Joshua Mission. She recently returned from her third trip in three years last February. 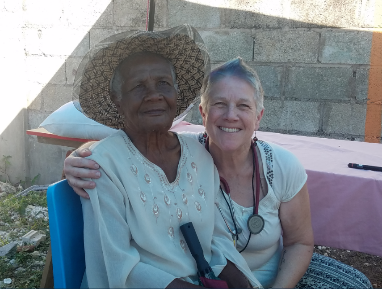 Housecall Providers Nurse Practitioner Barb Sutton finds inspiration in the generous spirit of the communities she helps in Jamaica.

The team was offered a church to use as a makeshift clinic and offered examinations from 7 a.m. to 2 p.m. to anyone who came through the door that week. The majority of what they treated was hypertension, diabetes and high cholesterol.

The clinical team included four nurse practitioners, two nurses and two EMTs, and a few people from the Rotary Club who helped with administrative duties and patient intake. While they only saw 300 patients this year compared to the 500 they treated last year, plans are in place to remedy that decline and increase foot traffic in the years to come.

Having the medical team there not only helps those who have acute problems that can be treated at the visit, it removes the costly first step of having to be seen at a standard clinic when more lab work or testing, 2.5 hours away at the hospital in Montego Bay, is necessary. The team worked with a local doctor who wrote orders and referrals for those who need further treatment.

“It costs about $30.00 up front for someone to walk into a health clinic to get the care they need, but $30.00 is an enormous amount of money in Jamaica,” Barb explains. “If the doctor says that they need tests or medication then they have to pay for that too, so it’s easy to see why so few people are accessing basic health care.”

Barb was struck once again this year by the generous spirit of the Negril community, and how they gave even when they had so little to offer.

“The church that housed our clinic last year took up a collection and gave us $200 to support our efforts in whatever way was needed,” Barb remembers. “It was overwhelming to see that kind of generosity on full display.”