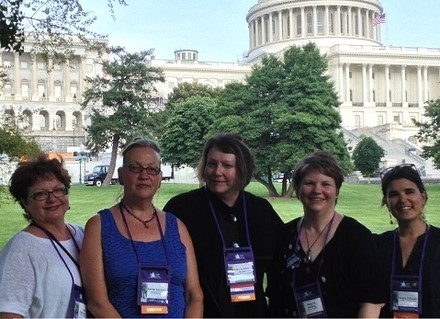 Housecall Providers Hospice Program Director Rebecca Ashling, MSN-RN traveled to Washington D.C. last month in support of hospice patients all across America. Rebecca was part of the five member Oregon delegation that was calling on Congress for assistance in halting a recent Center for Medicare & Medicaid Services (CMS) action that is leaving hospice patients without the medications they need at the end of life.

More than 200 hospice advocates representing over 200 Congressional districts participated in the Hospice Action Network’s (HAN) Hill Day Advocacy Intensive. The two day intensive first focused on educating the advocates about the CMS guidance that had recently been put into effect. The intent of the CMS guidance was to limit instances where Medicare Part D plan paid for medications. By requiring prior authorization on all non-hospice related medications (Medicare Part D), CMS is putting an already medically fragile population further in harm’s way.

All sides agree that this billing issue needs to be ironed out, it’s the way CMS went about fixing the issue that drew the ire of hospices across the nation. Rebecca heard numerous stories where patients weren’t allowed to receive medications or where one pharmacy, overwhelmed by the confusion, decided not to fill prescriptions for any hospice patients and it is the primary source for medications for several retirement communities!

On day two of the Advocacy Intensive, delegates visited congressional offices to talk with staff about stopping the implementation of the policy until an infrastructure is in place that protects hospice patients. Delegations from across America asked members of Congress to sign on to a letter to CMS to halt the regulation so that it could be implemented as intended, not how it is currently working. “Rebecca’s authenticity, enthusiasm, knowledge and ability to convey how it is to care for the dying and their families hit home in every Congressional office we visited,” said Oregon Hospice Association CEO and fellow delegate Deborah Whiting Jaques. “She was such an important member of the Oregon delegation.”

Two weeks after the Advocacy Intensive, CMS convened a meeting of stakeholders to discuss the issue. Though no official language was put forward to suspend the guidance, the meeting was applauded by HAN and those who attended the Advocacy Intensive as a step in the right direction to protect the nation’s medically fragile hospice patients.

“It was inspiring and invigorating time for me and the other members of the delegation,” Rebecca stated. “I felt that we made a difference.”