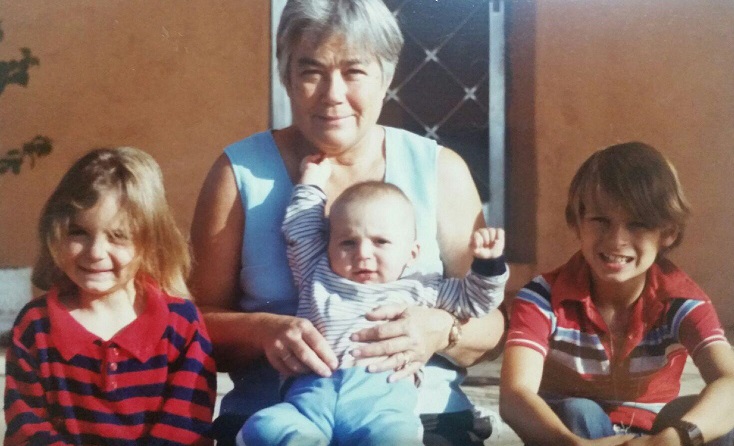 Bea with her grandchildren. Billy is on the far right.

Hospice care isn’t only about addressing the physical symptoms at the end of life, it is also attending to an individual’s emotional and spiritual needs.  “Untie the knots” is a phrase that is heard occasionally within Housecall Providers Hospice. It refers to times that team members help free patients from those things anchoring them to this life. In doing so, they assist patients in letting go of regrets or mistakes that are keeping them from finding peace. The same can be said for the patients’ family members, who through the hospice experience, have the opportunity to release emotional burdens they may be carrying.

“At the hospice admission we ask if their loved one has any unfinished business or if there are other family members that they may have lost touch with and would like to see,” said Hospice Case Manager, Morgan Clemenhagen, RN. On a particular hospice admission that Morgan and social worker Jane Leng, LCSW completed this spring, that question turned out to make all the difference in the world to a family looking for closure.

Morgan and Jane were admitting Virginia “Bea” Longway to hospice and Bea’s niece Linda Elsberry was present. “When they asked if there were any other family members who should be notified, I immediately thought of whom I needed to contact,” says Linda. Linda was thinking of Bea’s son Billy Rohn and her grandson Billy.  Bea had lost touch with them about four years earlier when she was living with her late husband’s family.

“Within the next week, I received a call from Billy,” Morgan said.

“I didn’t even know my grandmother was in an adult care home – we have missed her so much and had reached out years ago but it didn’t go anywhere,” Billy said. He soon made up for lost time and visited his grandmother with his father shortly after learning where she was living. He made the trip from Roseburg again a month later when Bea started her decline and he stayed at her bedside eight hours a day, for eight days until she passed.

“It was hard, but you know the experience is something I would never give back. It was beautiful to know that she was going to be at peace after living such a wonderful life,” Billy reflected.

Bea suffered from Alzheimer’s and had lived at Awakened Reflections, an adult care home run by Molly Gamache, for almost four years. “Molly and Tate [Molly’s husband] were outstanding. They were so competent in the care of my grandmother and wonderful with her. If I wasn’t able to be with her the last years of her life, I am glad she was at least with them,” Billy added. 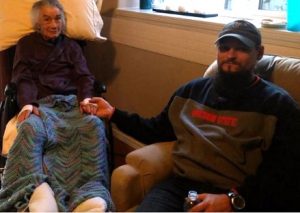 Bea and Billy on one of his last visits.

The bond between Billy and his grandmother started early on. He spent half time with his parents and the other half at her home in Texas until he was 18. Bea was the distant cousin of President Lyndon B. Johnson and her love of the state ran just as deep as that of our 36th president.

“When I was only months old, my grandmother was insistent that my first steps be planted on Texas soil,” Billy said. “So when the time came, my mom and dad put my crib in the back of the van and drove from Southern California to Texas so my grandmother’s wish could be fulfilled.”

Billy was so taken with that bit of family history that when his daughter was born in Oregon, he had dirt flown in from his mother-in-law’s ranch in Texas so that his grandmother could plant his daughter’s feet in the soil of the Lone Star State. “She was really tickled to be able to do that,” Billy said.

Billy and Molly were very appreciative of the care the Bea received from Housecall Providers Hospice. “They were very friendly, supportive, and comforting and were very interested in the stories I would tell them about her life,“ Billy said.  Molly too found a true partner in the care of Bea. “They are the best hospice I have ever worked with – every member of the team was professional, competent and a joy to work with,” Molly said.

Still, it is the days and final moments Billy had with his grandmother that he treasures most. “I am so thankful I was able to see my grandmother again. It means everything to me that I was able to be there with her,” he said.