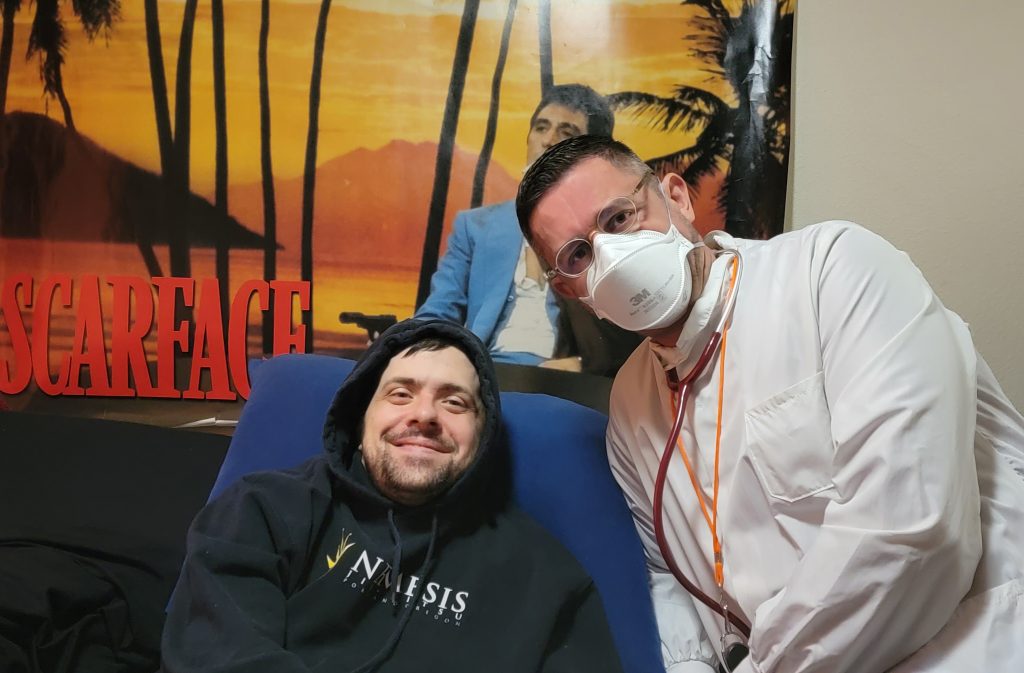 Craig and JC strike a pose for the camera.

Craig Ostrander is easy to like, with a broad grin and exuberant personality. Despite significant challenges, he is now hopeful and looks forward to each new goal he sets. But he wasn’t always like this. Before receiving care from Housecall Providers, life wasn’t so good. “I was hopeless,” says Craig. Suicidal, in fact. Craig wanted to share his story, because after the difficulties he has endured he wants people know that there is light at the end of the tunnel. For him, that light is Housecall Providers.

Craig is a partial quadriplegic. A swimming accident when he was sixteen left him almost completely paralyzed from the neck down yet experiencing intense pain. “I felt like my doctor didn’t believe me – couldn’t help me – and I couldn’t get out of bed,” Craig says.

Over the next several years, undiagnosed pain led Craig to seek out drugs to manage his pain. Without a doctor to monitor his dosages, he faced the new problem of addiction. What his previous doctors hadn’t diagnosed is called autonomic dysreflexia. This very serious condition causes excruciating pain and requires aggressive treatment.

Fortunately, Craig was referred to Housecall Providers, and introduced to Primary Care Medical Director JC Provost. JC is a specialist in pain management and, after listening to Craig and examining him, was able to quickly diagnose the condition.

“We started seeing each other about twice a week, trying to disentangle the situation,” says JC. “It took some time to get Craig on the right medications so we could move forward.” Once stable, with his dysreflexia being treated, Craig’s affect and mood began to improve.

The changes in Craig’s life can hardly be overstated. Through the benefits he receives from CareOregon Advantage, he is being fitted for a new motorized chair that will help him get outside without triggering his dysreflexia, as well as other services that will assist him be becoming more independent.

“Everything that usually takes so long, started happening very quickly and I have my team to thank for that,” Craig says. “They were doing everything they could, like finding services that I didn’t even know about. When you feel that people are finally listening and really want to help you, that is when you feel hopeful. They are like family to me now.”

Craig sees progress almost every day now. A life that seemed impossible only a year ago is not only possible, it’s a reality he thought he would never experience again.  Craig’s new outlook is a prime example why Housecall Providers’ mission is so vital to many people who, like Craig, struggle to get their medical needs met outside of the clinic setting.