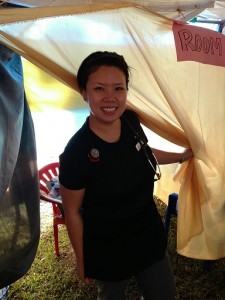 When Housecall Providers (HCP) clinician Pam Hiransomboon-Vogel, FNP was working as an RN in the intensive care unit of Oregon Health Science University, her coworker inadvertently planted a seed in her mind. He mentioned that his father was the medical director of Project Helping Hands, an Oregon nonprofit that sends medical volunteers overseas to provide treatment to those who lack access to healthcare. Pam, who had always wanted to visit Africa, started playing with the idea of combining her medical skills with traveling abroad. Eight years later, that thought became a reality when she was selected to a Project Helping Hands medical team headed for Uganda.

Pam returned last February from three weeks in Uganda splitting her time between Kampala, the capital city and the remote village of Nangaiza seven hours away. “Our team (clinicians and RNs) consisted of 11 members from across the US.  Four of us were from Portland, two being my good friends, so that helped ease my transition into a developing world,” Pam said.

The medical issues Pam encountered were quite different than the ones she sees daily as a clinician primarily treating a senior population. In Uganda, the median age of its citizens is 15 years old. Malaria is rampant and the leading cause of death for children under the age of five. “My medical training spans all ages, but after working at Housecall Providers for years, I wanted my colleagues to review my notes on children I had treated to check if I had diagnosed and prescribed correctly.”

All Project Helping Hands volunteers are expected to bring medical supplies with them so Pam raised a $1,000 through the online site Go Fund Me, funds that paid for her two suitcases full of supplies like Tylenol, prenatal and children’s vitamins, bandages, gloves, and Tums. Apparently, heartburn is a real health problem in Uganda because their diet consists mainly of a steamed green banana called matoke, a food that creates a lot of acid. “They aren’t relating the food to their symptoms, so much of my care focused on patient education.” 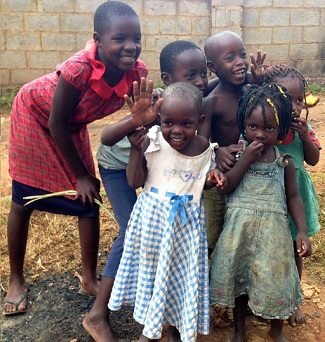 The beautiful, friendly faces of the Ugandan children.

In Kampala, the team was hosted by Robert, a local pastor who offered his church’s space for the clinic. The team took one day to set up, using tablecloths and string to create the illusion of six “exam rooms.”  Although Uganda has a national healthcare system, the public hospitals are difficult to access and it is the treatment that is free, not the diagnostics. Little clinics like these play a vital role in helping to identify illnesses that require treatment at a hospital. Pam treated mainly worm infections, heartburn, headaches from dehydration or untreated hypertension and skin, fungal and bacterial infections and malaria.

In Nangaiza, their accommodations weren’t as luxurious, as the clinic had to be set up in the open air. This added great excitement each evening when at sundown the hordes of mosquitos and insects would dive bomb their headlamps during examinations. Health wise, the main differences between the two sites were the lack of skin infections and the increase of high blood pressure. “In Nangaiza, I was told that everyone is related so seeing evidence of high blood pressure does make sense. We also saw more malaria cases in the village than the city.”

One observation that struck her as odd was the amount of cell phones or SIM cards that so many Ugandans possess. True, in recent years Africa has experience a boom in cell phone usage leading many to speculate or hope that their use will begin to transform the continent. “There is no running water or electricity, yet people have this technology. It was very strange for me to be ‘Facebooking’ from a rice paddy.”

In Kampala, Pam was seeing 20 to 25 patients a day, by the last day in Nangaiza she treated 60 patients. “My documentation at the beginning was very thorough, by the end, I was more concerned with being as concise and seeing as many people as possible.”  All told, the team saw 2,200 patients over an eight day period – a feat that seems almost impossible.  “I really didn’t know what to expect from the experience, except I knew it would be long, intense, and hot hours.”

A trip like this can’t help but affect one’s perspective and for Pam a sense of gratitude seems to permeate her experience. “I think about how lucky we are in the U.S. and all the things we take for granted like basic sanitation, access to medicine, running water and electricity. One thing my husband has noticed since my return is that I seem to complain a lot less.” 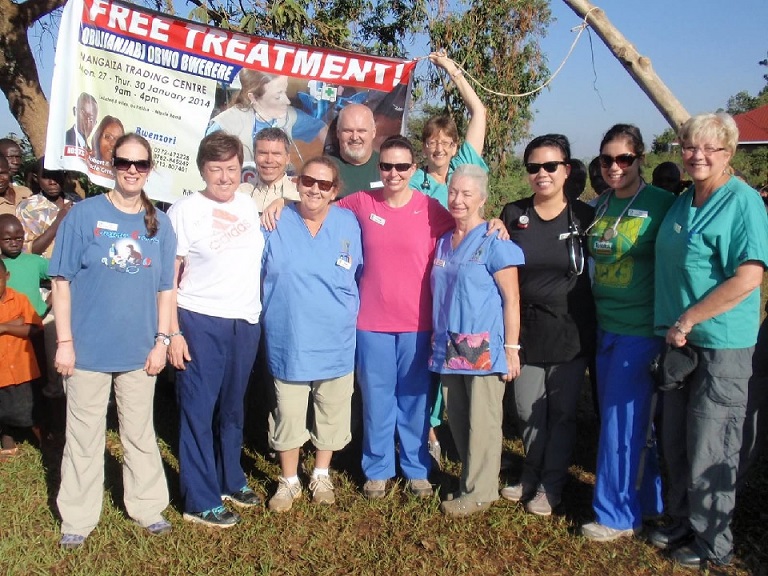 The medical team posing in front of the sign announcing their arrival.