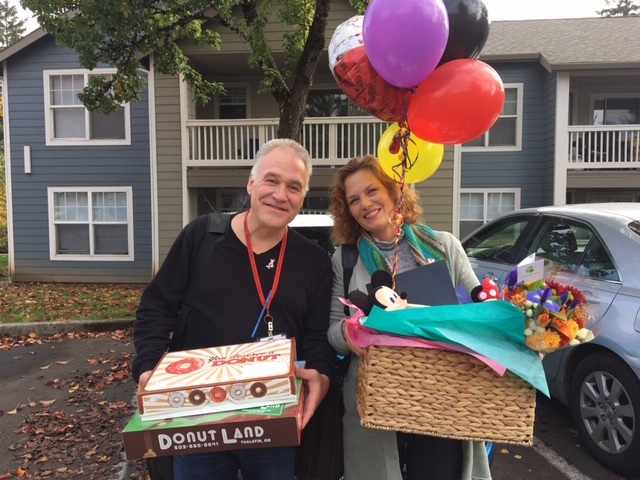 Hospice team members Steve Sehm and Nancy Jean Sill surprise their patient Jason Dawson with a party before his trip to Disneyland.

“Sometimes people come into our lives for a short time but make a lasting impact,” says Housecall Providers Hospice Nurse Nancy Jean Sill. “Jason was that person for many of us.”

For hospice team members who traditionally care for individuals at the latter stage of their lives — people who have, for the most part, come to terms with their mortality — providing end-of-life care to a 22-year-old changed the dynamics.

“Jason loved life and was a fighter because he had so much to live for. His relationship with Olivia was first on the list,” says Nancy Jean.

Jason’s main caregiver and love, Olivia Bonnar, met Jason two years ago — one month before he received his diagnosis of sacral cancer. Since that initial meeting, the two had been almost inseparable. This past summer, they had a commitment ceremony at a bed-and-breakfast atop beautiful Chehalem Mountain in Newberg, Ore.

“Our ceremony was nothing like we thought it would be, and honestly, I am so thankful it wasn’t,” says Olivia. “It was small and intimate and we were relieved of the pressure and expectation to put on a show or entertain so we could just concentrate on us.”

Hospice staff steps in to support the young couple

Since Jason’s immediate family wasn’t part of his care team, he found guidance, companionship and loving support in the faces of his hospice team, particularly nurse Nancy Jean and social worker Steve Sehm.

“Nurse Nancy has been there for us pretty much 24/7,” Jason remarked in November when asked to talk about the impact of his care team. “Steve has been awesome and has been one of the nicest guys ever. He deals with situations a lot better than most people.”

Over the course of visiting Jason and getting to know him better, Steve found out that it had been Jason’s long-desired wish to visit Disneyland. The social worker had heard about organizations that granted final wishes, so he made it his goal to see if he could make it happen for Jason.

“I did some research and came across the Dream Foundation, and in no time they got back to me with a ‘yes,’ ” says Steve. “I could barely wait to tell them the good news.”

While Jason was thrilled at the news that he and Olivia would be able to have this experience, the reality soon set in that this would be his last trip.

“While it’s unbelievable, it’s also bittersweet because the trip is signaling how close I am to departing, and it’s scary,” said Jason. “I think that is the hardest part.”

The gift from the Dream Foundation covered airfare, accommodations and a pair of three-day passes to Disneyland. What was still needed was money for food, travel costs and incidentals like a scooter to get around the park, because Jason was wheelchair bound. Staff put their heads together and contact Gifted Wishes, formerly the Pacific NW Hospice Foundation, which donated $500 in Visa gift cards to help make up the difference.

With the departure date looming, Jason began battling nausea and vomiting, and it was touch-and-go whether the airline would let him fly in that condition. “We had all done so much to get to this point that if Jason was still eager to go, we weren’t going to let much get in the way,” says Nancy Jean. Armed with anti-nausea medication and positive attitudes, the two boarded the flight heading to “the happiest place on Earth.”

“The first day I met Jason we talked about wanting to go to Disneyland,” says Olivia. “We were just blown away by that gift and generosity. Seeing Jason so happy was definitely my favorite part of the trip.” 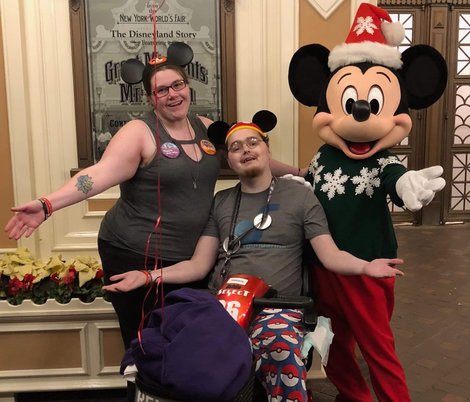 Jason and Olivia take a moment from their whirlwind adventure to strike a pose with Mickey.

Although Jason said he was “bummed” not to be able to go on any rides, he loved meeting Darth Vader and characters from his favorite movies: Tangled, Rapunzel and Flynn Ryder.

“His favorite place to eat in Disneyland was Pizza Planet from Toy Story,” recalls Olivia. “Since it is his favorite food, we ended up going there twice, which I was more than willing to do because it was actually something he was willing to eat.”

Once the adventure was in the rearview mirror and the daily routine returned to normal, Olivia and Jason began what would be their final month together.

“It became increasingly difficult mentally and emotionally to care for him as he required more and more help,” says Olivia. “I tried the best I could, and the help I received from my mom and the amazing nurse Nancy made all the difference.”

Final wish was to be at home

Approximately a week before he passed, Jason was admitted to Legacy’s Hopewell House in Southwest Portland to initiate IV opioids to better control his spiking pain. The plan was that once his pain was under control, he would return home. It was a promise he had made to Olivia.

“I was so torn because I was losing the love of my life,” says Olivia, “but Jason was gaining peace and his pain was finally ceasing.”

Fulfilling his promise, Jason did return home and died peacefully the next day. “There was no struggle, and he had a small smile on his face,” remembers Olivia. “It is as if he knew he was finally at peace.”

Many can only imagine what it must feel like to have such an enormous burden placed on them at such a young age. For Olivia, what made it all bearable was the support she received from her family and the hospice team.

“Jason and I were just so thankful that we were referred to Housecall Providers Hospice,” says Olivia. “I can’t thank them enough and the rest of the staff for the kindness they showed and how they went above and beyond for us.”