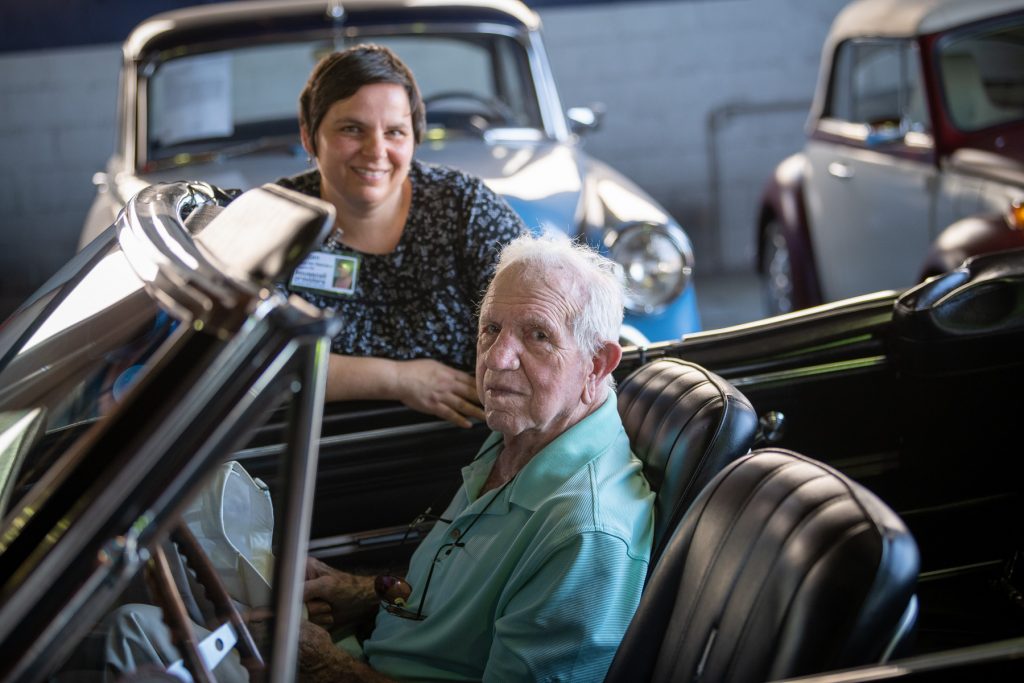 Last year Gillian Beck van Heemstra, RN, orchestrated a virtual reality experience for hospice patient Glenn Morris so he could “swim” with sea turtles and “ride” a roller coaster. Gillian, a Housecall Providers hospice nurse, is always full of good ideas, especially to brighten her patients’ lives. This past summer, she was at it again, paving the way for her car buff patient, Gino Damico, to tool around in a 1966 black Chevy Chevelle convertible.

“Gino has framed pictures of his favorite cars he’s owned up on the walls in his room,” says Gillian, who could plainly see the joy they’d brought him over the years.

Over his lifetime, Gino, 92, has owned 25 classic cars, including a Jaguar, many Mercedes, a few Cadillacs and – his prized possession – a 1929 Ford Model A convertible, complete with rumble seat. Knowing how much Gino would love to ride in one of these beauties again, Gillian called Affordable Classics in Gladstone. Owner Juan Ruiz was happy to oblige her request to indulge a fellow car enthusiast.

“Gino is such a sweetheart,” says Gillian. “You can tell immediately that he’s an interesting person, very social, has a lot of stories to tell.”

A longtime affection for cars is just one aspect of Gino’s fascinating life. Despite late-stage Parkinson’s disease, Gino has regaled Gillian with colorful stories from his past: Lifeguarding in the late 1940s at Roamers Rest on the Tualatin River. Owning Gino’s Turquoise Room on Barbur Boulevard, home of a five-piece band and dance contests. Working as an operating engineer and crane operator for 54 years. And during one visit, Gillian and Gino learned that they had lived in the same Hawaiian town, albeit at different times.

For Gino’s throw-back car ride, Juan picked a ‘66 Chevelle – the muscle car of that era. But Gino also eyed a Mercedes-Benz convertible, because, he notes simply, “It’s a Mercedes.”

The big day, his niece and nephew Linda and Bruce McGavin picked up Gino to bring him to the shop. “On our way in, Gino asked if he was going to drive the car, so we had to let him know that this time he was just going to be a passenger,” recalls Linda with a smile. “You can tell there’s still some gas in that engine.”