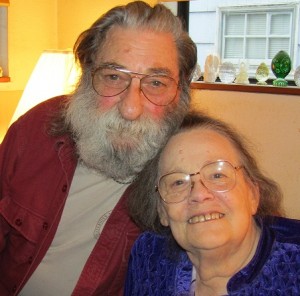 Willie and Mickey Brown celebrated their 57th wedding anniversary this year. Mickey has been receiving medical care from HCP since 2012.

Housecall Providers primary care patient Lenora “Mickey” Brown is no victim. Stricken with polio at the age five, she was resolved, even at such a young age, to never let the disease shape the type of person she would become. Now, 70 years later, it is clear that she has held true to that commitment.

“I think self-pity is a person’s worst enemy,” she said. “You have to learn to take things as they come and say, ‘Okay, give me some more and I will take care of it.’”

The poliovirus left her completely paralyzed. To survive, she had to lie flat on her back in an “iron lung.” Her prognosis was dire; no one expected her to live long. But one physician, Dr. Allen Voshell, had a different plan.

He took a shine to Mickey, this tenacious young girl who refused to let polio rob her of her life or the ability to walk. He was the Medical Director and Surgeon-in-Chief at Kernan Hospital in Baltimore, MD, at the time, one of the leading hospitals in the country for disabled children. He made it so Mickey could enter the rehabilitation facility, where she could work to regain the use of her legs and arms. When she finished rehab two years later, she walked out under her own power.

Integrating back into society and elementary school came easy for Mickey because she excelled in academics and social pursuits. After graduating from high school, she had two stints working in the business world before meeting and shortly thereafter marrying Navy man, Willie Brown. The two shared their 57th wedding anniversary this year.

That in itself was about as unexpected as Mickey’s physical recovery. “He was rude and a little crazy, but his humor did have me doubled over many times,” she admitted. “He won over my family and then just kept pushing his way in until I realized finally what a kind, wonderful and giving person this man was.” 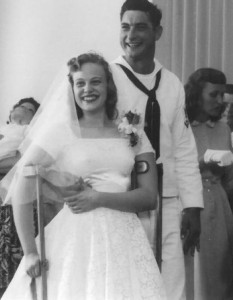 Mickey and Willie on the most happiest of days.

A son was born to the young couple, and the little family moved about, following Willie’s military assignment and later his work with the railroad. Eventually, they settled in Portland’s Cully neighborhood, where they were reunited with nearby family, and built a strong community of lifelong friends and neighbors. When Willie’s job with the railroad was eliminated, he began what would be a 30 year career for the U.S. Postal Service. Mickey spent time involved in youth activities and also served as Portland president and state president within the Letter Carriers Auxiliary, which is the volunteer support group for the union.

The family’s busy, normal life was disrupted when, 20 years ago, Mickey was diagnosed with post-polio syndrome. The condition affects 25% to 50% of polio survivors and is characterized by new and progressive muscular weakness, pain, and fatigue. “At first the doctor thought I was having some arthritis and as I was experiencing more pain and gradual loss of mobility, then he changed the diagnosis to post-polio syndrome,” she said.

She was hospitalized in 2006 and again in 2008 for infections; the second infection required surgery and a lengthy recovery in a rehabilitation center. “One of the reasons I kept getting the infections is that I wasn’t going to the doctor because it was so difficult for me to get to the clinic,” she stated. “I was calling my doctor all the time but there is only so much he could do over the phone so my health was spiraling downward.”

Mickey gets introduced to home-based medicine

It was in 2012 when a caseworker at Aging & Disabilities Services told her about Housecall Providers and gave her an application. It wasn’t long after that she was assigned physician assistant Laura Hanks as her in home primary care provider.

“It’s been wonderful to have Laura, she is my angel. She is very comfortable to be with and she knows exactly what she is doing, recognizing problems before they get bad. And, when she feels that I am doing well, she leaves me alone,” she said, smiling.

Mickey has also been able to receive counseling through the services of Housecall Providers’ Licensed Clinical Social Worker, Kirk Porter. “Kirk visited me every other week for quite a long time and I was able to spill things to him that I had never spoken about to anyone,” she said. “If you don’t get rid of those feelings verbally, you’ll be living alone with them every day. I am very grateful for all his help.”

It seems that the little girl with the indomitable spirit not only survived, but thrived even in the most challenging times of her life when struggle and heartache seemed to rule her personal landscape, none greater than the loss of her son Jim in 1994.

“People have said, ‘I marvel at you.’ Well, what’s to marvel? I love life and people and was never going to hide in a corner and throw my life away. “Every bad thing that has happened to me I learned from it,” she said. “The in home care I have received from Housecall Providers has allowed me to live my life the way I want to live it.”