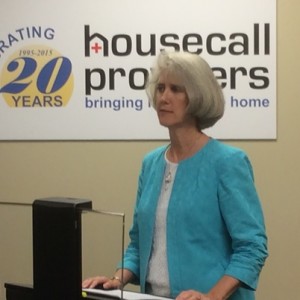 It was lights! Camera! Action! at Housecall Providers on Thursday, June 18, as the organization’s leaders met with local media to discuss the results of the first year of the Independence at Home (IAH) demonstration project.

The excitement began early that morning with the official release of the IAH results by the Centers for Medicare and Medicaid Services (CMS). After waiting for weeks for CMS to release first-year results, Executive Director Terri Hobbs and her team were well prepared to meet the press to discuss the exceptionally good news about Housecall Providers’ participation in IAH.

Housecall Providers saved Medicare over $1.8 million dollars on 220 patients during the initial year of the demonstration and received $1.2 million as part of their shared savings. Housecall Providers also was the number one site of the 17 involved in the demonstration for cost savings per patient.
“We are thrilled to be able to share this data with the public,” Hobbs said. “It validates the home-based model by showing that you can provide this high-quality medical care and still save money,” she continued.

The Associated Press had been given the news earlier, and the Portland Business Journal’s Elizabeth Hayes arrived shortly after the conference to write this article about the project’s results.

Hobbs, Mary Sayre and Dr. Pamela Miner took turns at the podium as cameras rolled, explaining Housecall Providers’ service model, the significance of the numbers produced by Housecall Providers’ team, and why IAH represents a paradigm shift for the way Medicare patients will be cared for in the future.

Even as this trio spoke, the news was breaking all across the nation as newspapers, television stations and other media outlets picked up the AP article. And which site alone was featured in the AP story? Housecall Providers, of course. The reporter described what the “new house call” looked like, and reported on a visit with a Housecall Providers patient.

“Forget the little black bag of yore,” the story said. “Today’s house calls can result in an EKG in the living room, and on-the-spot tests for infections. Providers can use portable X-rays, check medicine bottles to tell if patients are taking their pills, take blood and urine samples to check for infections as well as spot tripping hazards, and peek in the kitchen to see if healthy food is on hand.

‘It helps you avoid the emergency situations,’ said Naomi Rasmussen, whose 83-year-old father in Portland, Oregon, is part of Medicare’s Independence at Home study.”

All in all, an extremely exciting morning for everyone at Housecall Providers, as the days of relative anonymity for this innovative organization officially came to an end.