Response to the ProPublica article, “How Hospice Became a For-Profit Hustle” 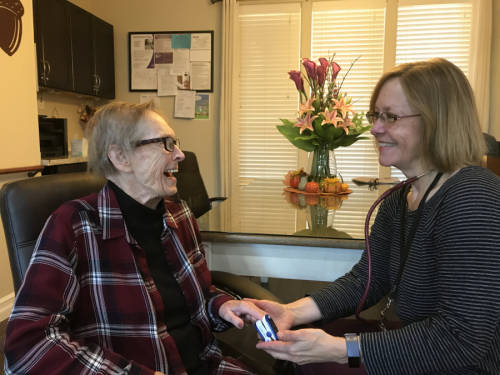 When hospice care is delivered the way it was intended under the Medicare benefit, it can be an enriching experience for the patient, family members and the team delivering the care.

As one of the few independent not-for-profit hospices in the Portland metro area, I want to take a moment let you know about an epidemic threatening the very core of America’s hospice systems— for-profit, often equity-backed hospices gaming the system at the expense of the dying and the taxpayers.
Last week, ProPublica (promptly picked up by The New Yorker) published, “How Hospice Became a For-Profit Hustle” an expose on the impact of for-profit hospices on both the dying and the thousands of everyday Americans inappropriately lured into enrolling for hospice, thus making it impossible for them to access curative treatments. As one might expect, there has been a substantial public response from various advocacy and policy groups as well as hospices from across the nation.
As the CEO of Housecall Providers, I want to explain our position on some of the main points expressed in the article. We stand with our partner organization, the National Partnership for Healthcare and Hospice Innovation (NPHI), in full support of this investigation being published, and of the bill currently under consideration by Congress that could help restore the integrity of the hospice industry.

While the instances of fraud and abuse cited may be new to many, for those of us in the nonprofit hospice community space, they are just another set of examples of how some for-profit hospices are gaming the system at the expense of the dying and the taxpayers who have been funding this program since the early 80s. Hospice needs to be protected from people and companies whose sole motivation is to turn a profit. If the rampant fraud and abuse by for-profit hospices goes unchecked and is allowed to continue, the fate of nonprofit hospices like Housecall Providers hangs in the balance.

Hospice is a sacred time for terminally ill individuals and their family members. It is the time when treatment shifts from curative measures in favor of comfort care and symptom management. The patient’s physical, emotional and spiritual needs are supported by an interdisciplinary team in a holistic manner that aligns with their treatment wishes. When hospice is done right, people’s symptoms are managed, and their remaining time can be spent focused on things that are most important to them.

What the article revealed were numerous examples where this was not the case. People enrolled in the for-profit hospices mentioned in the article were subjected to inadequate health care from ill-equipped medical staff, being over or undermedicated, disenrolled weeks before their death, or not provided health care at all. Hospice care for some of these patients “worsened or impeded the opportunity to improve their quality of life.” Furthermore, it concluded that the Centers for Medicare and Medicaid Services (CMS) does not appear to have a way forward to stop the significant fraud and abuse that is plaguing this Medicare benefit.

The patient and family experiences revealed by the investigation are heartbreaking.  These stories do not represent hospice and are antithetical to the kind of care Housecall Providers Hospice delivers. Our team of doctors, nurses, social workers, chaplains, CNAs, and volunteers are called to this sacred work to soothe, comfort and guide patients and families at one of life’s most poignant times. I know this, in part, because my mother-in-law is on our hospice. Just yesterday we received a message from our hospice team after they’d given her a bath, that she needed warmer, more comfortable socks. They were worried about the cold weather and wanted her as comfortable as possible. My husband teared up as he read me the message. “Wow,” he said, “they really care about her, don’t they?” This is the kind of hospice experience we want for all who are enrolled in this Medicare program. While we must harshly penalize the hospice practices exposed in this article, we also need to protect the hospices who deliver hospice care as though it is a human right.

The author states that in 2007, according to one of the hospice whistle-blower’s calculations, seventy percent of the patients served by her mobile office were discharged from hospice alive. This is a staggering figure and something that Medicare tracks to mitigate fraud. For comparison, in 2021 Housecall Providers Hospice’s live-discharge rate was six percent. She further states, “for-profit providers made up thirty percent of the field at the start of this century. Today, they represent more than seventy percent, and between 2011 and 2019, research shows, the number of hospices owned by private-equity firms tripled.”

Additionally, the “aggregate Medicare margins of for-profit providers are three times that of their nonprofit counterparts.” This fact really resonated with me. Housecall Providers Hospice is competing for relevance in a market with a dwindling number of not-for-profit hospice colleagues and a rapidly growing field of for-profit, national hospice companies who have at their disposal the kind of resources we could only dream about. Too often these resources are not used for improvements in patient care but are rather used to increase enrollment, sometimes fraudulently, without concern for patient choice and eligibility. While there are undoubtedly some excellent for-profit hospices that prioritize high-quality care over profits, there are many opportunists who view hospice as a money-making endeavor and have been able to operate under the radar these past two decades. Perhaps this is the reason that the growth of for-profit hospices is about 10-15 times the growth of non-profit hospices. In 2018, the Office of Inspector General at the Department of Health and Human Services estimated that inappropriate billing by hospice providers had cost taxpayers “hundreds of millions of dollars.” Many people believe that number to be higher.

(NPHI) is advocating and partnering with Congress and CMS to develop nuanced policies and regulations that will protect the integrity and sanctity of the end-of-life health care that most not-for-profit hospices, like Housecall Providers, deliver. We support calling for Congress to pass in its upcoming funding package, the MEDPAC recommendation to reduce the hospice aggregate cap by twenty percent. The cap cut policy was initially created as a program integrity measure meant to penalize those hospices that consistently operate over the cap and are associated with lower quality outcomes and higher live discharge rates. In our collective view, it’s imperative that we take any possible action to address the continued entry of bad actors that threaten the financial viability of all NPHI members. Hospice needs to be protected and while this recommendation is not the complete answer to the abhorrent abuses detailed in the article, it is a good first step to making sure that those hospices that are in it for the money will not see the returns that they or their shareholders have been banking on all these years.