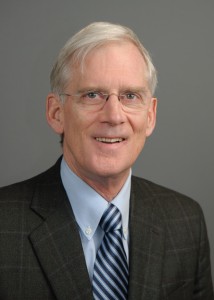 As with so many others who are associated with Housecall Providers, Woody English, M.D., set out early in life on the path that would lead him to Oregon’s premiere in-home medical care service.

English, board president for Housecall Providers, was hospitalized shortly after high school graduation for a considerable time. During his stay, he became familiar with both the medical profession and with a number of doctors and medical students.

“I was the same age as the students,” he recalls. “I could talk to them at night, we’d talk for hours. I got insight into the profession from the medical students and residents while in the hospital, and I became interested in a career in medicine.”

English was treated by a surgeon who got to know him as a whole person, not just someone with a diagnosis who needed medical attention.

“He was a wonderful human being. The way he took care of me left an impression. That model of care I took with me,” he says.

He was drawn to difficult diseases–at first, Legionnaire’s Disease, and then toxic shock syndrome. Next came a puzzling cluster of mostly gay men in Los Angeles in the early 1980s, suffering from wasting infections. AIDS had struck, and English was there for the initial engagement with the deadly disease.

Moving to Oregon, he continued to treat AIDS patients, and was among the founders of the Oregon AIDS Task Force. English was discovering what we now call palliative care.

“No one survived it, not back then,” he says. “So we did what we could to manage their symptoms, to make them comfortable. I treated them at home whenever possible.”

His work took him in other directions. But in 2006-2007, he returned to palliative care as a hospitalist with Providence Health Systems. Among his professional acquaintances and, later, friends: Dr. Benneth Husted, founder of Housecall Providers.

“As hospitalists we are taking care of people when they are most sick and isolated,” he says. “But our staffers were not schooled in outpatient care. So I got very interested in how to empower patients to come up with a good cohesive goals of care plan. And I brought that into the hospitalist program.”

How does Dr. English, who joined the Housecall Providers board several years ago, define palliative care?

“Palliative care has mostly to do with relationships–to place–to people–to heritage–to belief systems,” he says. “Then there’s an existential issue that we as human beings are really sensitive to. We are often deeply affected by the meaning and purpose of things, including our own lives.

When our physical self-starts to falter then, in some people, these meanings become more acute. And these need to be addressed through palliative care.”

The timing of Dr. English’s ascension to board chair could not be more appropriate. Housecall Providers, whose clinicians have always practiced palliative care, launched a formal palliative care program in October, with staff dedicated to this discipline. And that program will have a true palliative care pioneer at the head of its board of directors to guide it as it grows.